With origins in the 11th century, Greys Court presents a picturesque Elizabethan house, much developed through the centuries and with one surviving tower dating from 1347.  The medieval enlargements by Sir Francis Knollys remained largely unchanged till the 19th century.  The parkland and ha-ha were probably created in the 18th century and the ornamental planting within the medieval enclosure walls date for the most part to the mid-20th century.  From the 1930s it has been the home of the Brunner family.   Lady Brunner was instrumental in re-landscaping the gardens, commissioning work from the architect Francis Pollen and garden designer Kitty Lloyd Jones, amongst others. The property was passed to the National Trust in 1968.

The kitchen garden of 0.3 ha, is situated 85 metres east of the house. It is the largest of a series of gardens and has a shelter belt to the north east.  The 1st edn OS (1878) map shows this was a productive garden with two glasshouses, a perimeter path and trees.  The walls dating from 18th, 19th and 20th centuries are made of flint and brick and include some reused medieval dressed stone.

A perimeter path remains and an off-centre cruciform path divides the garden into four sections, which include the orchard (south west), glasshouses (east), vegetable beds (north east) and an ornamental covered walk leading to the 100 year old Wysteria  garden (north west). Two modern reproduction glasshouses are located in the same position as those on the 3rd edn OS (1913) survey.   There is a distinctive modern water feature in the south west corner of the garden and a charming wooden sculpture by Charles Taylor in the south east.  The south facing wall is planted, alternatively, with fig and clematis.  One old apple tree and one old plum tree remain, as well as several lead fruit tree labels.

Two bothies, one for the gardeners and one known as the ‘kitchen bothy’ are built back to back on the north east wall.  They are modern brick and most likely were constructed at the time of the National Trust guardianship. 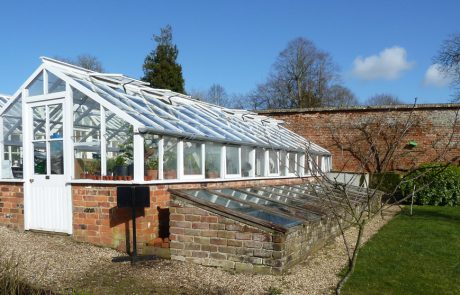 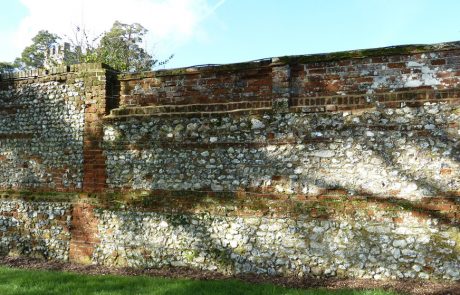 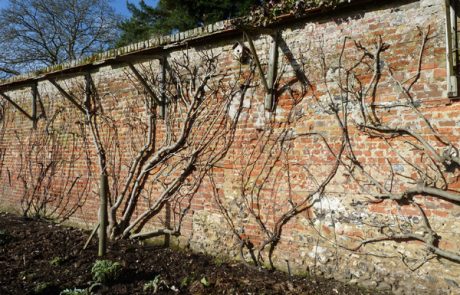 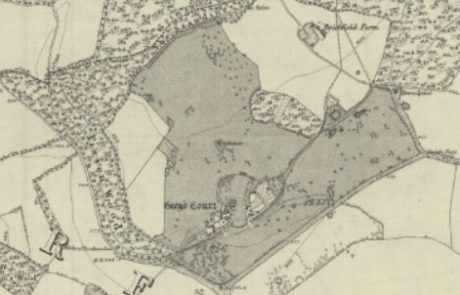 Currently the garden is both ornamental and productive.

Greys Court is included in the Historic England Register of Historic Parks and Gardens at Grade II. The outer and the inner walls of the kitchen garden are listed Grade II as having special architectural or historic interest.

Further information is available in the National Heritage List for England

The garden walls are complete, the glasshouses and cold frames reconstructed and planting appropriate to the original layout.