Blenheim Palace was designed by Sir John Vanbrugh assisted by Nicholas Hawksmoor in 1705 – 1722 for the 1st Duke and Duchess of Marlborough. Simultaneously, the formal gardens were created by Henry Wise, and in 1764 Lancelot Brown landscaped the park. The kitchen garden, designed by Vanbrugh, was constructed by the master bricklayers Thomas Churchill and Richard Stacey in c. 1710. Charles Bridgeman’s plan of 1709 shows it divided internally into two halves with each half sub-divided into four quadrants around a central circular pond. Opposite the ponds, projecting out from the north and south walls, are semi-circular bastions. 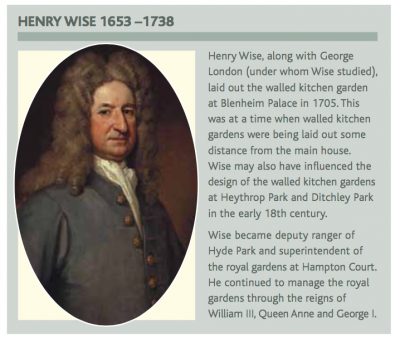 The rectangular walled kitchen garden lies over 600 metres south-east of the Palace where it occupies an area of 3.2 ha, measuring c. 80 x 320 metres with an east-west axis. The irregular slip garden to the south, serving as an orchard, is another 1.6 ha in area and a frame yard to the north was originally 0.3 ha.

The central gateways in the north and south walls have large piers over moulded stone plinths. A Palladian gateway was built in the west wall by William Chambers in 1772. On each side of the four bastions are keyed stone ashlar niches set inside the walls; the one to the north-west has a bellcote and bell above. The original melon house attached to the south-west walls was extended in the late 18th century to provide a gardener’s house.

The 1st edn OS map shows nine glasshouses within or attached to the walls plus four others in the frame yard. By 1899, the 2nd edn OS map shows the area of the frame yard to have tripled and the number of glasshouses to have more than quadrupled. The early glasshouses have largely been demolished although traces survive, such as the 12 hinged window frames high in the south wall. Fruit trees lined the walls, indicated by the numerous training nails and nail holes, while other fruit, particularly grapes, peaches, melons and pineapples were grown in hothouses. 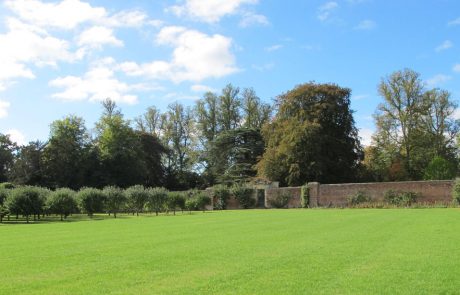 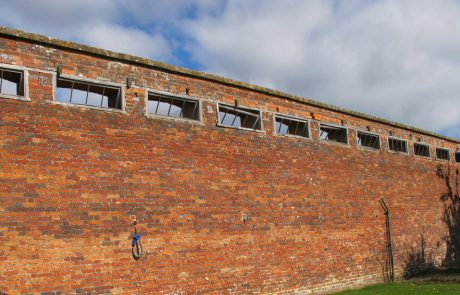 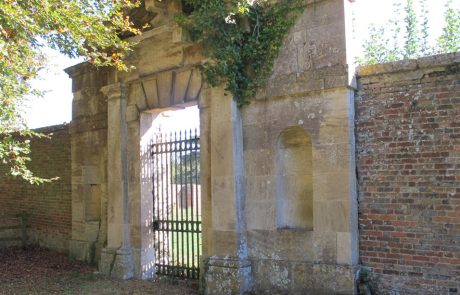 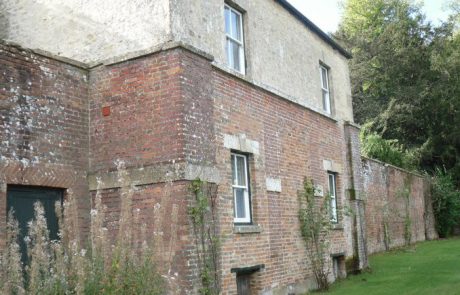 Bapasola, J, 2009, The Finest View in England: The Landscape and Gardens at Blenheim Palace.

Portrait and text of Henry Wise from The Walled Kitchen Gardens of Oxfordshire p. 6 The Oxfordshire Gardens Trust, 2014