A well-used recreation ground with play and sports amenities, which lies adjacent to an historic canal and bridge.

The recreation ground was initiated in 1938 when the city council purchased a field from St John’s College. In 1965, Lucy’s Eagle Ironworks bought the adjacent 1.6 ha site from St John’s College to create a sports and social club. The two adjacent grounds continued alongside each other until at least 1994. Today, all the land that once belonged to Eagle Ironworks and their sports ground in Jericho is now occupied by housing, which was developed by Berkeley Homes between 1996 and 1999.

The sub-rectangular ground of 1.3 ha lies on the south side of Aristotle Lane. The long east boundary is adjacent to the Midlands to Oxford canal that runs due south into the city. The low lying land was previously marshland and currently there are drainage ditches along the east and south edges of the recreation ground.

Amenities include a railed play area at the north-east corner with equipment aimed at younger children. Immediately outside the railings is a basketball goal and a table tennis table, and further south are six new exercise and climbing frames and swings intended for older children. To the west there is a multi-use goal and two football goals sited within the grassed field.

The ground is only 250m from Port Meadow via a bridge over the railway lines, which provides a popular route from Jericho. Port Meadow is one of the largest open spaces in the north of the city, with the River Thames flowing through and causing annual winter floods, but also attracting flocks of wildfowl and waders.

The playground has one mature golden weeping willow. The east, south and west edges of the ground comprise areas of scrub that include mature and younger trees, predominantly self-sown willow, cherry trees, ash, alder, hawthorn and bramble, which provide wildlife opportunities. In summer, the areas of scrub are very dense comprising abundant willow and bramble, but nevertheless pathways are mowed amongst the scrub. 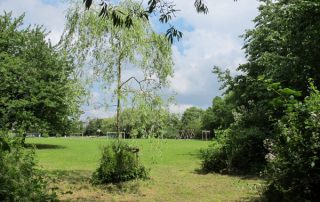 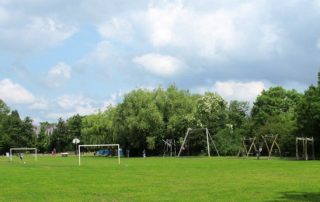 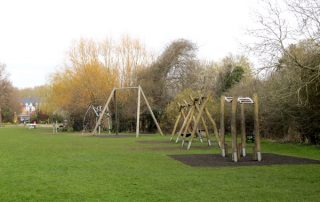 Proximity to Port Meadow, a Site of Special Scientific Interest and a Scheduled Ancient Monument.

The adjacent narrow road bridge over the canal at the north-east corner of the ground was built by 1790 by the office of James Brindley and is listed Grade II.