The park was opened in 1936 on land donated to Oxford City Council by Frederick Moss in memory of his recently deceased sister Florence. The park offers space for leisure and play as well as being home to a popular children’s nursery and a community café.

Land in East Oxford, previously market garden, farm and marshland, was purchased from Christ Church College, Oxford by Frederick Moss who was a speculative builder and City Councillor for Cowley and Iffley ward. Moss procured the land to construct housing for the influx of people coming to work at the Morris Motors factory in Cowley. Land for the park was donated to Oxford City Council (OCC) in 1934. It was laid out and planted by George Mold assisted by head gardener Reg Dollery. With much ceremony, Mary Townsend, Mayor of Oxford, formally opened the park on 27th July 1936. The park quickly became a community hub for a wide range of activities for the local residents and money was raised to build a community centre, completed in 1957. Popular clubs over the years have been crib, darts, football, bowls, snooker, young wives and pensioners.

Florence Park stretches over 21 acres (8.5 ha), three acres of which are designated as a children’s playground, as specified by Moss when the land was donated. The park is located between the Iffley and the Cowley Roads in East Oxford with St Gregory the Great School to the north and suburban houses on the remaining boundaries.

The original iron railings surround the park. The main gate is from Cornwallis Road to the south, which offers vehicular and pedestrian access. Here there are plaques on the gate piers that commemorate the opening of the park and the dedication to Moss’s sister, Florence. There is also a memorial plaque near the main gates which is dedicated to George Mold (1907‒1993) who built the park and helped design the original planting. There are further pedestrian entrances – one from the seasonal car park at the south-east corner of the park, and others from Rymers Lane and Campbell Road.

The park is laid out with trees and walkways, lined in places by flowerbeds. The original planting included native and non-native trees. Oxford Tree Trails have created a map to assist identification. Of particular note is the avenue of mature horse chestnut trees planted in 1953 to mark the coronation of Queen Elizabeth II. On the east side of the park the original design included an existing line of elm trees, visible on early photographs, which ran along the stream that feeds into Boundary Brook, but these trees eventually fell victim to Dutch Elm Disease.

The children’s playground is protected by metal fencing. For safety reasons the paddling pool was filled in some years ago. The park’s bandstand, now no longer used for concerts, is well maintained. Its weather vane has an emblem of an ox, which remembers the Morris Motors badge as well as Oxford’s coat of arms. 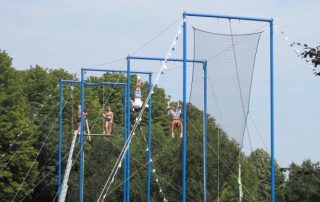 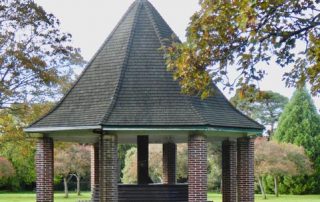 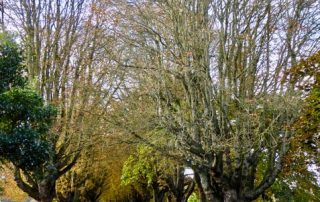 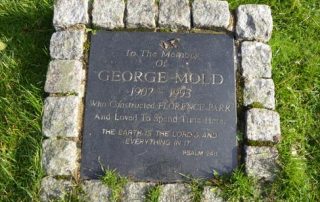 The children’s playground comprises slides and climbing equipment and is well used. In the summer months the tennis courts are used for both tennis and trapeze schools. Other facilities include a bowling green, a table tennis table, and miniature golf.

‘Flo’s – The Place in the Park’ is an active children’s nursery, parents’ space and community café. It has been sustained by community action.

Original plantings include the coronation avenue of horse chestnut trees and a line of black poplars. The park has a Green Flag Award from Keep Britain Tidy to recognize its high standard, and there is an active management plan from OCC.

The park is owned and managed by OCC. It is open from 8 am each day until dusk.

Destination: Little Wales, a new short film made by students at Film Oxford, explores the journeys of former miners from the valleys of South Wales to Oxford in the 1920s and ’30s. Many found work at the Morris car factory and Pressed Steel in Cowley, and homes in newly-built Florence Park, or ‘Little Wales’ as it became known. View the film here