This well-used recreation ground has an open grassed field, a children’s play area and a variety of trees and wooded scrub at the margins. It offers easy access to the adjacent historic Willow Walk and to the ancient Hinksey Meadows.

Fields on both sides of Botley Road were used as meadow land for grazing and hay making. The enclosure map of 1853 shows James Morrell Junior and the Bishop of Oxford were the owners of the field called ‘Oatlands’. In 1926, Colonel Ffennell bought Oatlands field in order to protect it from further development. In 1927, he offered to sell it to the City of Oxford for the original cost price. The southern part of Oatlands field was to become Oatlands Road Recreation Ground, while the east half may have originated as the playing field for West Oxford School.

The 5.1 ha ground is 700m west of Oxford rail station on the south side of Botley Road. The land is flat and low-lying being part of the Thames floodplain which frequently floods.

The ground has an enclosed playing area to the west with additional equipment nearby for older children. The open grassed field has football goals. There are areas of scrub and undergrowth along the margins where willows dominate. Ash trees are also common here and 31 were planted in a line just south of the path that runs across the north side, together with cherry, oak and alder. To the west is Bulstake Stream edged with wide areas of scrub with mature willows, some pollarded, as well as many young trees and multi-stemmed species. At the north-west corner is a wooden bridge over Bulstake Stream that leads directly to the adjacent King George’s Playing Field.

On adjacent land to the south is Willow Walk pathway which was created as a route between the village of North Hinksey and Oxford and was opened to the public in the 1920s. Closeby are the flower-rich Hinksey Meadows owned and managed by Oxford Preservation Trust that are thought to have been used as hay meadows for much of the last thousand years. 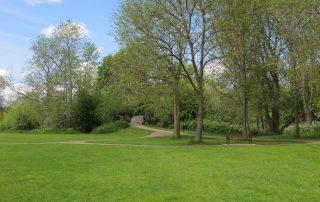 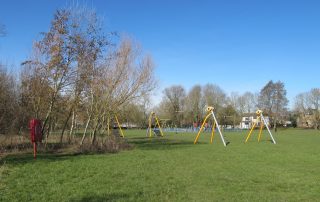 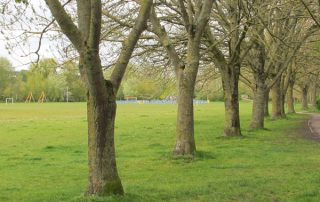 Enclosure map (1853) Plan of Botley Meadow, Oatlands and Osney Meadow in the Parish of Saint Thomas in the county of Oxford 1853. QS/D/A/book11. By permission of Oxfordshire History Centre