A well-used and popular recreation ground that has offered sports, leisure and play amenities since the 1920s and still contributes much social value to the local community.   The historic Tumbling Bay Bathing Place, created in the 1850s, lies at the rear of the park and is accessible on land only via the park.

From the 19th century there was an increasing housing requirement in west Oxford mainly for workers at the nearby railways. But it was not until 1922 that the city council bought land on the north side of Botley Road to provide space for recreation and leisure. Initially this was a recreation ground divided across the centre with the sports facilities to the north and children’s play areas and communal buildings to the south.

Botley Park lies 400m due west of Oxford rail station on the north side of Botley Road, opposite St Frideswide Church and to the immediate west of the allotments. The 4.7 ha ground is flat and low-lying being part of the Thames floodplain and frequently floods. Ridge and furrow lines, indicative of medieval ploughing, are visible running east to west.

Close to the entrance is the 2-storey community building of West Oxford Community Association. The park’s play and sports areas lie to the north of this building in a line running along the boundary with the allotments. A children’s playground lies adjacent, followed by a multi-use games area, two tennis courts and two bowling greens.

At the north-west corner of the park is Kingfisher Corner wildlife area comprising shrubbery, small trees and fallen trunks offering wildlife spotting opportunities, intended mainly for children’s education and entertainment. The middle of the park is an open grassed area with football goals. At the north-east corner of the park, amongst trees and shrubbery, is the entrance to Tumbling Bay Bathing Place, created in the 1850s, initially for men only. Access was originally via a ferry from the opposite side of the Thames, and entry from the park began in 1955. Its use as a bathing place formerly ceased when Oxford City Council closed all its Thames bathing places in 1990. 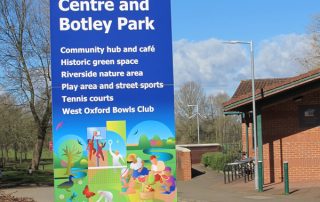 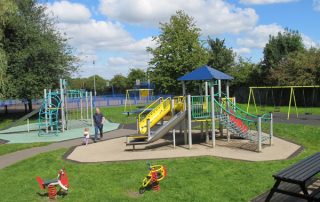 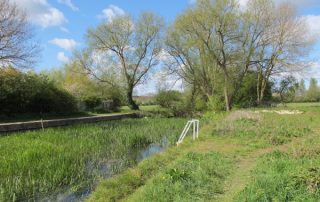 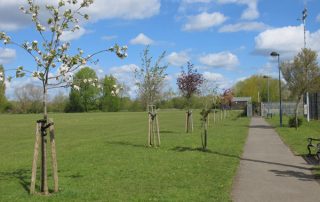 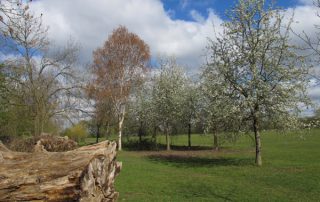