Asthall Manor was built in the early 17th century, although a house has been on the site since the 13th century.   The present manor is a vernacular two-storey Jacobean house built in local Costwold limestone.  The garden, not including the walled garden, covers 2.4 ha and was designed by Julian and Isobel Bannerman for the present owners. Famously the house was the home of the Mitford family from 1919 to 1926. C E Bateman carried out extensions to the house at this time and may also have designed the walled garden buildings.

The garden is 0.43 ha and is on the opposite side of the road to the house.  It is square in shape, with walls on all sides, built of coursed limestone rubble.  There is no evidence on the 1st, 2nd or 3rd edn OS maps that this was a garden, so it is probable that it originated in the 20th century during the occupation of the manor by the Redesdale and the Mitford family.

Two buildings in the walled garden echo social activities in the Mitfords era. The slate-roofed Arts and Crafts building contains antique farm implements and machinery, while the adjacent nearly derelict two-roomed summer house has evidence of shelving, cupboards and a stove.

The small stone pen on the east wall of the garden, could have been for animals and may have origins in an earlier and more agricultural use of the area. There is a water point in the centre north part of the garden. 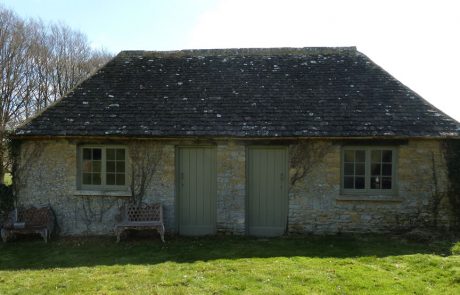 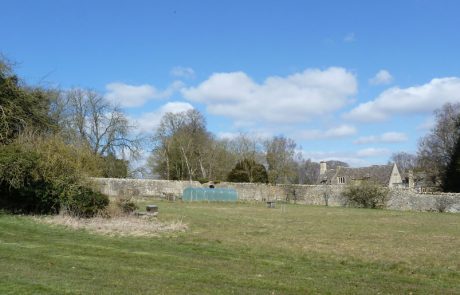 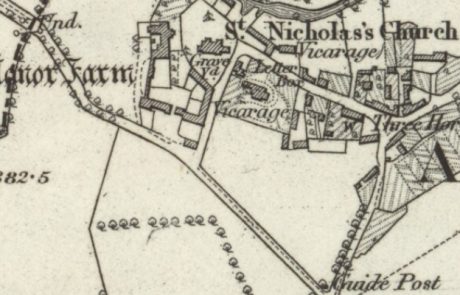 Currently the walled garden is laid to grass with less than a quarter separated for fruit and vegetables, in the north west corner. There is a modern reproduction Victorian glasshouse.  The north wall has evidence of fruit tree training and an older specimen pear tree amongst some new planting.

The Arts and Crafts building, the derelict summerhouse and the walled animal pen.

None for the walled garden.

The garden walls are complete, however the planting, frameyard and glasshouses are no longer extant.

Otwell, Gordon (1999) Literary Strolls Around the Cotswolds and the Forest of Dean. Sigma Leisure. p. 71