The Pusey family owned and lived on the estate from at least the 12th century. The present house was built in 1748 when the park and pleasure grounds were also laid out. The lake, Chinese bridge and temple all date from the mid-18th century. The house was the birthplace of Edward Bouverie-Pusey, Canon of Christ Church and Regius Professor of Hebrew at Oxford, whose name became synonymous with the 19th century Oxford Movement. In 1935, the Hornby family purchased the estate and employed Sir Geoffrey Jellicoe to extend the terraces of the formal gardens. Resold recently.

To the south-west of the house and stable block is a series of four connecting walled gardens, occupying 4⅓ acres, and shown on the 1st edn OS map (1876). The walls are mainly coursed limestone rubble on the outer sides and within the slips, and brick in Flemish or English Garden Wall bond on the inner sides, with fired clay block copings.

The largest garden, joining the stables and a small walled courtyard to the east, is an irregular polygon in shape, with slips to the north and west sides. The long axis is north-east to south-west, although the principal entrances are to the north and south. Originally with perimeter and cruciform paths, the latter now repositioned to the west of the garden.

The south-west corner connects to a small and almost square Lady Emily’s garden, which also connects to the orchard and the formal garden near the temple. Cruciform paths run from the corners of the garden, linking the three pedestrian entrances, and enhancing the north-south orientation. A perimeter path alone is visible on the 1st edn OS map.

The most southern garden is an irregular shaped productive orchard which connects with Lady Emily’s garden to the north-east, and the vegetable and glasshouse garden to the north. The south side is bordered by a stream, crossed by a bridge leading to the estate. The long axis is east to west.

The glasshouse garden to the north of the orchard is irregular in shape with the long axis east to west. There are four glasshouses; the oldest runs along the north wall and is shown on the 1st edn OS map. The other structures are late 19th century, and later. 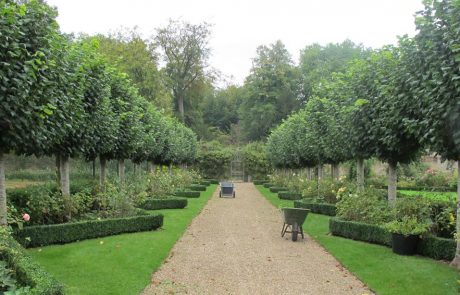 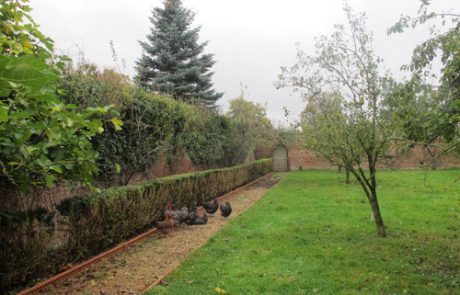 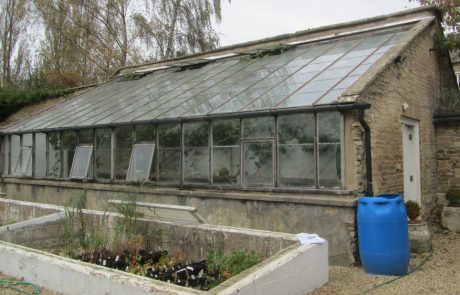 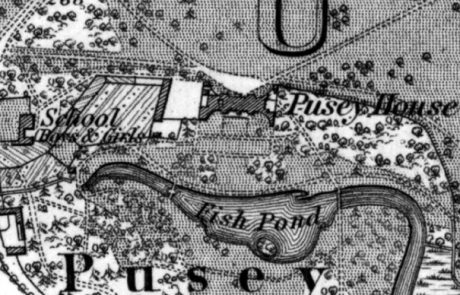 Ornamental, recreational and productive. A tennis court is now inserted in the east side of the large garden, and a swimming pool in the adjacent courtyard. The large garden and Lady Emily’s garden contain abundant ornamental trees and herbaceous shrubs, particularly roses and climbers. Productive cultivation in the glasshouse garden (vegetables and fruit), the orchard (apple, plum and cherry), and selective fruit trees in the large garden. Fowl in the orchard and the west slip.

In the north slip is a filled-in well of unknown date but not shown on the 1st edn OS map.

Three entrances between the walled gardens and the estate have 20th century iron ornamental gates that bear the ‘Pusey Horn’ (the crest of both the Pusey and Hornby families).

Good. Some walls have been altered to enhance access, and some paths lost or altered.

Privately owned, not open to the public.