The house was built between 1780 and 1983 for a local landowner, Edward Loveden, in Italianate country house style. In the 19th century it was turned into a ‘model agricultural estate’ and in 1889 purchased by the present encumbant’s great grandfather, who, in 1916, became the 1st Lord Faringdon. The house passed into the care of the National Trust in 1956 but remains the family home of the 3rd Lord Faringdon. Approached by a sweeping drive, the house enjoys views of the Thames, mature woodland walks, a small lake, and the Italianate water garden designed by Harold Peto.

The walled garden of 0.6 ha, now known as the Four Seasons Garden, planting design by Tim Rees, is situated 150 metres to the west of the house. It is an irregular octagonal shape and the ground falls from all the walls to the large central pond but with more dramatic drops on the west and east sides. The 1st edn OS (1876) map shows perimeter and cruciform paths, with trees, the pond and glasshouses along the north and south walls. To the north of the garden was a large frameyard with multiple glasshouses, frames, gardeners’ sheds, a boiler house and stables. Until the mid 19th century, the garden was completely encircled by outer brick walls, creating a wide slip of 30m and making the whole garden 2 ha. Trees were planted in all areas and in the north west corner was the gardener’s house, still in use today. Both the outer and inner walls are mostly of brick and built in the 18th century, allegedly made from the mud during the formation of the lake. There are four entrances to the garden, flanked by tall stones piers, corresponding to the points of the compass, each of which leads to an ‘eye-catcher’. 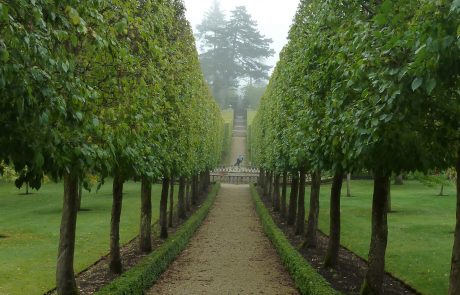 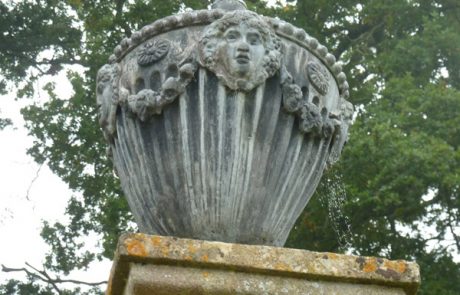 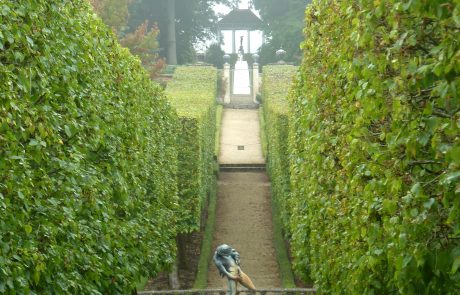 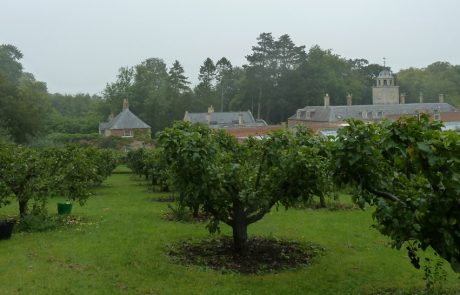 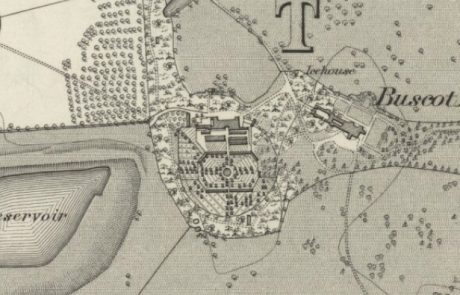 Currently the garden is ornamental, divided into grassed quadrants with a pleached hop hornbeam avenue running west to east and an arcade of pink and white Judas trees running north to south. Fruit trees are trained against the walls and although the glasshouses are no longer extant some remnants of a peach porch are attached to the north and west walls. The wide perimeter borders are planted with herbaceous plants and shrubs, interspersed with some vegetables “in recognition of the past use of the garden”. The large pond in the centre of the garden has a central water feature, possibly ‘Aquarius’, water lilies and fish. In the frameyard, one glasshouse has been renovated and houses a grapevine, planted in 1785, reputed to be a cutting from the famous Black Hamburg vine at Hampton Court. The ‘slips’ are grassed and planted with young fruit trees.

Degree of completeness The majority of the garden walls are complete. The planting and glasshouses within the walled garden are not longer extant. The frameyard retains one reconstructed glasshouse and gardener’s bothies but has been mostly redesigned into an ornamental garden.

National Trust. Open to the public over the summer months.